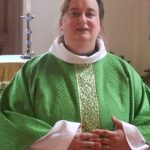 Here is a little bit about me, by way of introduction. I was born in Farnborough(in what is now the Princess Royal Hospital) in Kent in 1968  As my Dad was a vicar like me I have lived all over the dioceses, in Caterham in Surrey, in Abbey Wood (not too far away) and in Sydenham.

From the age of 8 until my ordination in 2004 I sang in the church choir and love all church music from Gregorian chant to more modern Christian groups such as Delirious and Casting Crowns. I also love music by Bryan Adams and Dolly Parton. I love to read, anything and everything but mostly Detectives, Science fiction, chick lit, even the back of the cereal box.

I am married to David and have two boys Richard and Matthew. My three men keep me focused and on the straight and narrow.

I started my working life with WH Smiths and worked in various branches, Holborn Circus, Croydon, Beckenham, Catford, Woolwich, and Forest Hill to name but a few. After Seven years I then went to work selling mobile phones for a Motorola dealer, and then I moved to Canterbury to work for SPCK an Anglican Mission Society running their Canterbury bookshop and subsequently coordinating the south east area.

In 2004 I was ordained curate of Barham, Bishopsbourne, Kingston and Womenswold and then I was Priest in Charge of Wingham, Preston, Elmstone & Stourmouth in 2007. I was appointed Vicar of All Saints New Eltham in 2009 and have been here ever since.

New Eltham is a community in which I am proud to be a part of. Sharing Gods love with those around us and serving his church in this place.